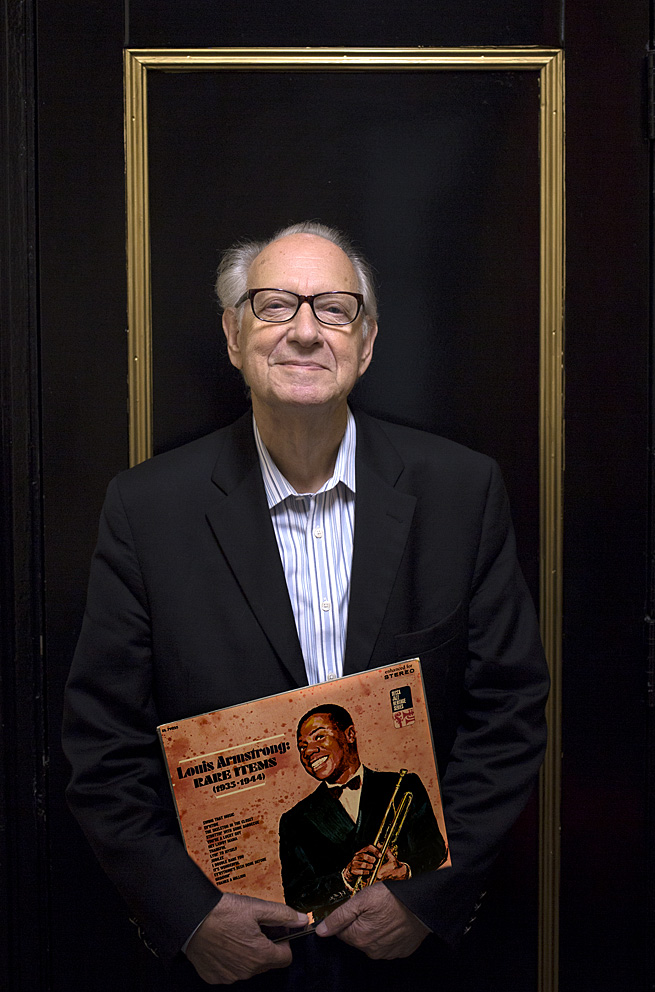 
“Well, this is an album of Louis Armstrong's called 'Rare Items' which I had something to do with putting together, and they are mostly things from the 1930's, a period that, at least at the time. was not considered by critics to be as significant as 'The Hot Five, Hot Sevens' or the later 'All Stars' things ,but this was music that was very significant to me because I, so to speak, grew up with it.

I discovered things about Louis - these are wonderful records. Among them numbers like 'Swing That Music', which was also the title of his first autobiography, published in 1936 and released, coincidentally, simultaneously in England and the USA.

On that he displays his amazing facility - I could count 42 consecutive high C's and an F and a G at the end (laughs).

And beautiful things like Hoagy Carmichael's 'Ev'ntide', which is a very pretty tune that oddly enough has not been recorded by many people; Bob Wilber did it many years later.

Anyway, this was a kind of statement about Armstrong that was important to me because I felt that period had been underestimated and I still love all those things. I did the notes for it as well. Milt Gabler, at the time, was in charge of reissues at Decca. Milt was a wonderful man, he was the founder of Commodore Records and a great friend, a personal friend, to jazz musicians. It was special to me, and I was very happy that it was well received."

William - And it stayed with you Dan obviously. After all the records, all the music you've played, listened to and reviewed perhaps.... that record’s just stuck with you all this time.

Dan - "Well, you know, it was something that was very personal to me, because these were things that I'd learned to love.... as you know, in the 78 stage, when you had to work for your music. When I started out I had a wind up phonograph! ( laughs).

I was very lucky to get to know Armstrong, I met him in 1950 and I had the great pleasure of spending time with him in his very busy life, a little bit on the band bus and a few times at his home and backstage at various places.

So, he was such a unique person, as a human being and an artist, and there won't ever be anyone like him again -- ever!

Note: All the "Rare Items" plus all others from this period were later issued by Mosaic Records as "The Complete Louis Armstrong Decca Sessions (1935-1946)", a 7 CD set, with notes by Mr. Morgenstern.