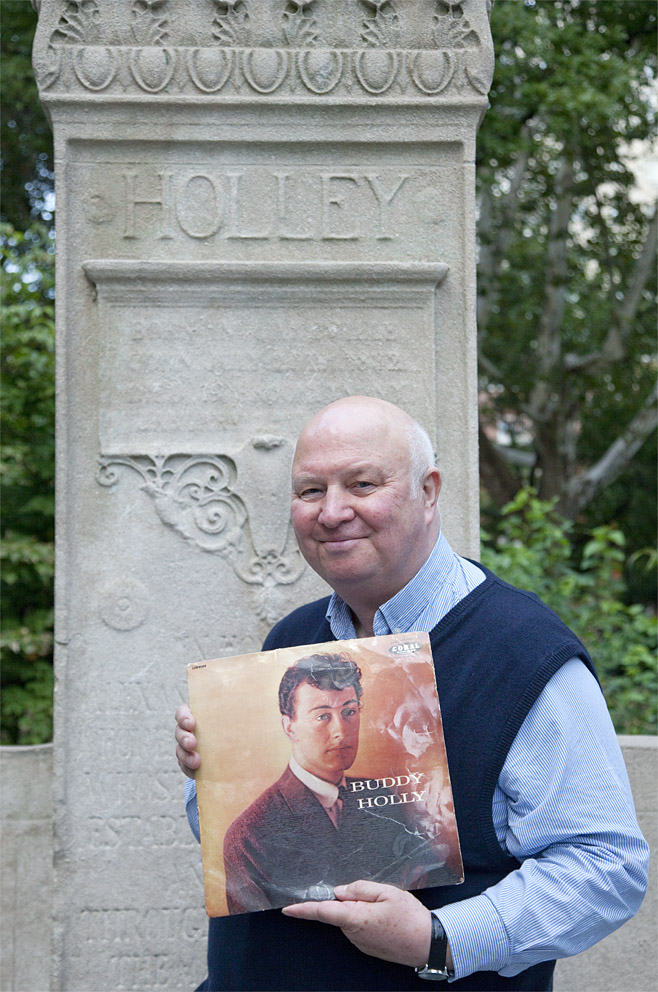 
"This is ‘Buddy Holly’, his first album as Buddy Holly..

He’d released a record with his band The Crickets called ‘The ‘Chirpin’ Crickets’ prior to that but this is his first solo album.

I think what’s so special about this place (Washington Square Park, Greenwich Village) is in late 58 early 59, Buddy lived about a block away from here.

His real name is Charles Hardin Holley. I’m sure Buddy came past this statue of a guy named Alexander Holley and I wonder if he ever stood in front of it.

I grew up in Blackburn Lancashire in the 50s and early 60s. It was a grey sort of place and Buddy’s music was so light and bouncy and happy … it was wonderful. Stuff like ‘Peggy Sue’, ‘Rave On’; they were just magnificent. He had some tender songs as well, such as ‘Words of Love’, which is absolutely beautiful.

I followed Buddy for a long time and for the last few years I’ve written about Buddy and I’ve travelled to various parts of the States.

I’ve been to Lubbock, his home town; Clovis where he recorded; Clear Lake, Iowa, where he died in the plane crash.

I’ve been to Duluth where the young Bob Dylan saw him. I’ve been across to Los Angeles to see his star on the Hollywood Walk of Fame next to The Beatles and here, on the East Coast in New York, where he recorded in his apartment some great songs such as ‘Crying, Waiting and Hoping’.

Buddy for me is great and this album is very significant because when I was in Lubbock I was interviewed by his best friend from those days at KDAV Radio.

I was interviewed live and he asked ‘What song do you want me to play?’

I said ‘I’m a gonna love you too’, which kicked of the album - very bright and breezy.

So that’s me and Buddy Holly. Great, great guy."