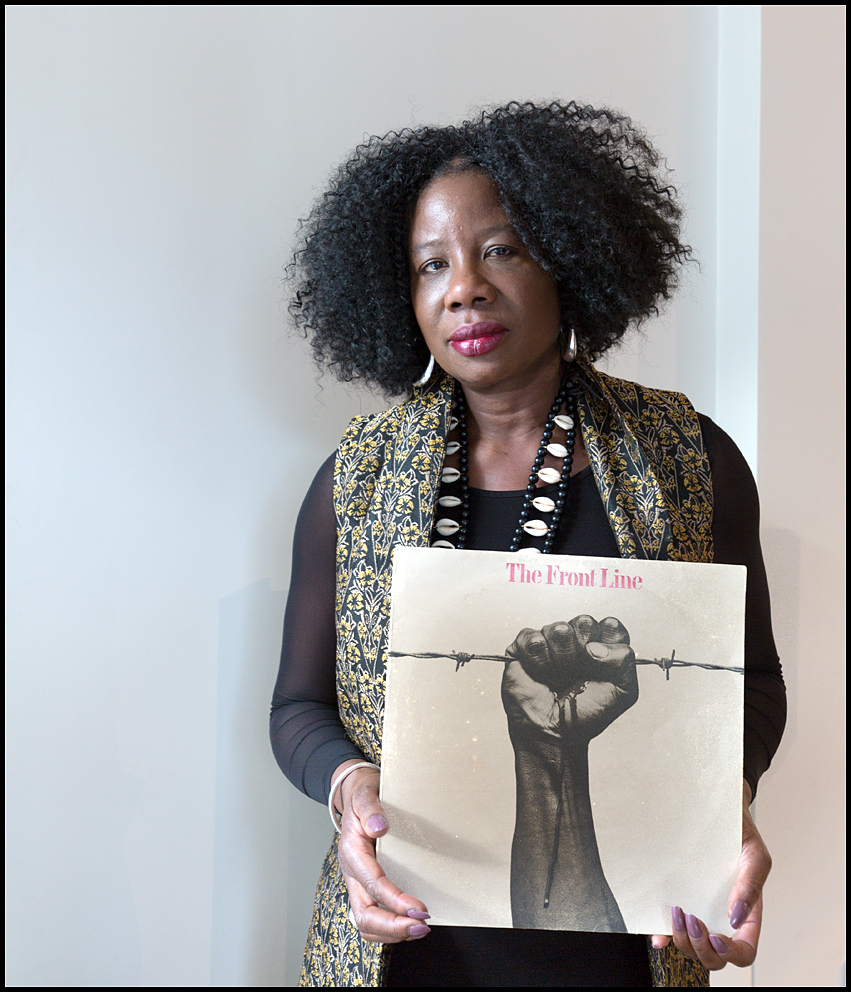 
“I have to start by saying it was an almost impossible task to choose one album but I’ve chosen “The Front Line” album for the fact that 1976 when this LP was released was a very significant year for Black struggle, including the June 16th Soweto Uprisings in South Africa. The following year 1977 I visited Africa for the first time which had a profound and life changing impact on me and it was also the year that Steve Biko of the Black Conscious Movement (BCM) was assassinated which began the awakening of my political consciousness. Growing up in Britain I was aware of the Front Line on Railton Road near to where I grew up in Talma Road, Brixton and later knowing other Front Lines in Handsworth in Birmingham and Toxteth in Liverpool as back in the day we as black people in Britain were more unified in our struggles against oppression - and also saw our struggles reflected in places across the world where we had never been to.

For me the "Front Line" is a genius compilation of seminal tracks including the Mighty Diamonds’ “Africa’ and “Right Time” Delroy Washington’s “Freedom Fighters”, Johnny Clarke’s “Declaration of Rights” and U Roy’s “Natty Rebel” such powerful tracks that punctuated our struggles as black people internationally.

Visually the LP is very powerful too, made even more striking as it’s in black and white – I don’t think it would have been so compelling had it been in colour. For me as well as the wider struggle of black people I think it represents my personal struggle for identity and the spirit to overcome physical and mental oppression. The late 70s and 80s was a time of my musical awakening and I suppose the time when I began playing at family parties which led eventually to me setting up Nzinga Soundz as DJ Ade alongside June Reid aka DJ Junie Rankin my close friend and partner in the sound.

The reason why this LP is particularly special for me is because it was produced by Virgin Records – and Virgin Records was where June and I had our first "proper" jobs back in the 80’s on Oxford Street in London.

I was the first black female buyer for Reggae 12 inch and Soca sections and I also established the World Music and the Africa sections at Virgin Records. We learnt a lot about music during those years and spent a lot of time with suppliers such as Jet Star Records and we were very instrumental in making sure that this album was really well stocked along with many other really important records coming out at that time particularly Jamaican and African Reggae artists.

As a DJ - alongside Junie Rankin we played this LP a lot, I remember thinking how cheap it was £1.29 if I'm correct! So little for such a genius album, I think even in those days it was the same price as a 12 inch single. As a sound we had the good fortune of playing at some seminal events not just parties and private functions but also on community radio and at certain concerts when we were booked by promoters such as Wilf Walker to play at The Astoria, then in Charing Cross when the Mighty Diamonds were in concert and then having the chance to meet these artists and have them sign our records was a major honour for us.

So the Front Line represents a key part of my journey but very much resonating with the struggles of black people both in the Caribbean and in Africa, for me it is really like a commentary of those journeys from my youth to womanhood and fighting for agency within U.K. society.”