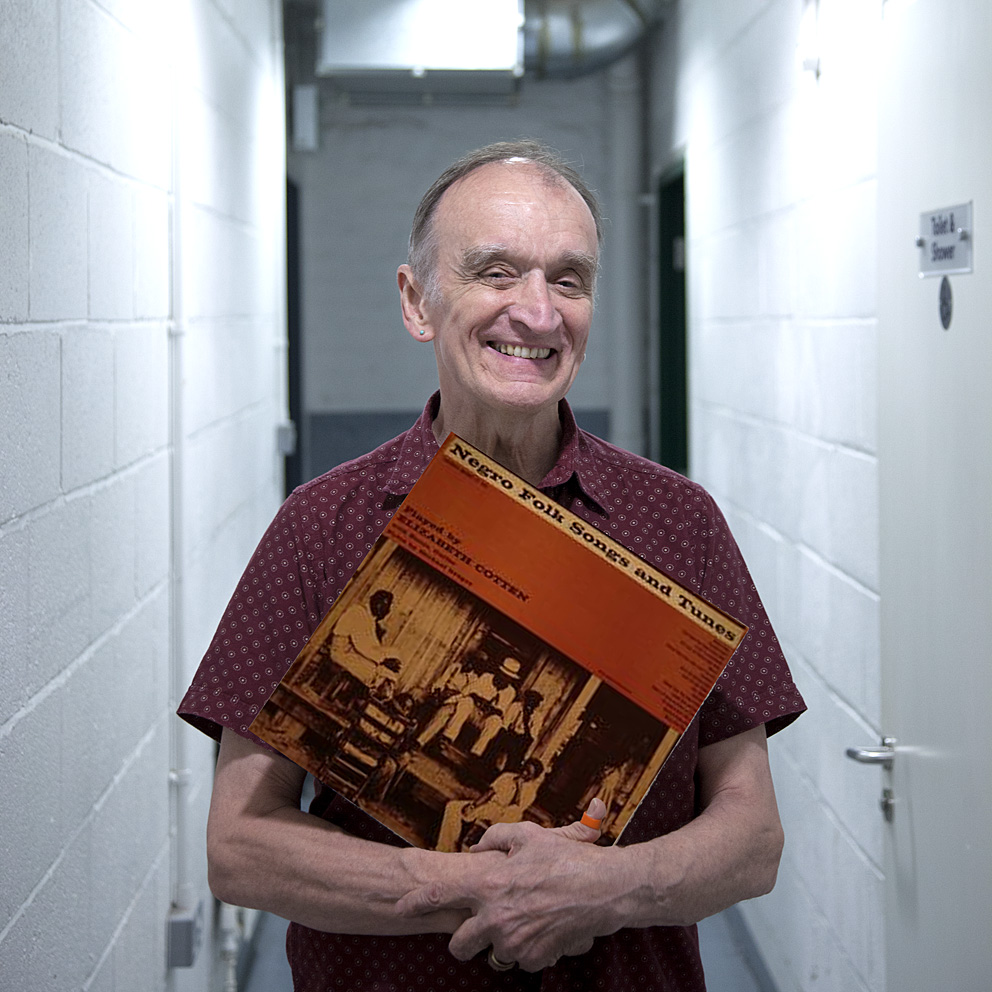 
“There was a woman I heard in 1959 - a woman called Elizabeth Cotten L-I-B-B-A - Libba Cotten and she played a thing called 'Wilson Rag' but also played 'Freight Train'.

She was the person who gave the world Freight Train and I heard her name when when she a representative of hers sued Chaz McDavitt and Nancy Whisky because they claimed to have written it - and she wrote it and she won the law suit.

And then I heard the record and bought this record. It was on Folkways Records and it was on 'Negro Folksongs and Tune's... it was of its time!

And its second track was Freight Train and I just remember listening to that - listening to it - and thinking - I want to one day play as lyrically as that - that's how I would love to play.

I didn't understand until later on that she played left handed and upside down. She always wanted to play and her brother had a guitar and he wouldn't allow her to use it c'os it meant having to switch the strings all round - so she just learned to play upside down and fashioned this way of playing that was just beautiful, beautiful beautiful thing, very delicate and beautifully lyrical and I thought ‘if I can ever play like that I'll be a happy man’. And that's one of the people on my record.”

The other two were singers, one of them was a Yarmouth fisherman called Sam Larner. He was about 80 when I saw him singing - he was just amazing..

“When was that... I reckon it was 1958 or 1959. So I was 17 - I might have been 18 - and I just heard this old man singing and he sang a music I couldn't have dreamed of. Just absolutely beautiful stuff because English folk music - the real thing- is very, very odd, it's really odd and I kept thinking 'nobody can sing a tune like that - that's the weirdest tune I've ever heard in my entire life. It was his way with a song called 'Henry .... he didn't call it ' Henry Martin' but it was his way a Henry Martin story and it was just beautiful and I walked home thinking 'it's crazy - nobody can sing a tune like that and I was Lah lah -ing the tune to myself as I went along thinking ‘'nah.... you can't sing a tune like that' .... I didn't see the joke for 20 years you know. ( laughs).

And the other one was this - he's a traveller a Scotts traveler/singer you know called Davy Stuart (Hutchison) who I used to do lots of gigs when I used to tour up in Scotland a lot - lovely bloke - he was a traveller and he was wonderfully bonkers and he played a huge piano accordion when he sang and his chording was from another planet. It was just - when I first heard it I thought it was all wrong but as I got used to it I thought it can't be done any other way - it's got to be his way or the highway. (Laughs).

MC - “Absolutely, absolutely, absolutely right. What he did was right for him and he was another one of those old men who had a passion about his singing. I hear it now and I'm just .. I still get.... I still get goose pimples - every hair on my body stands on end - I haven't got much left but what there is stands up to attention when he starts to sing. And my favourite song of his is a thing called ‘MacPherson’s Farewell’ about a fiddler who's being hanged and err, they wind the clock on a quarter of an hour because they know the reprieve is coming. So they put the clock on a quarter of an hour. So they hanged him and before they hanged him he took his fiddle and he smashed it saying 'no one else shall play this and whack! - smashed it. This bloke sings that song - absolutely beautiful - Davy Stuart.”

MC - “Put those three names on that record - ‘Libba Cotten with Sam Larner and Davy Stuart’.

No such album - never will be - unless I do a sensational remix! Nothing’s impossible these days!”