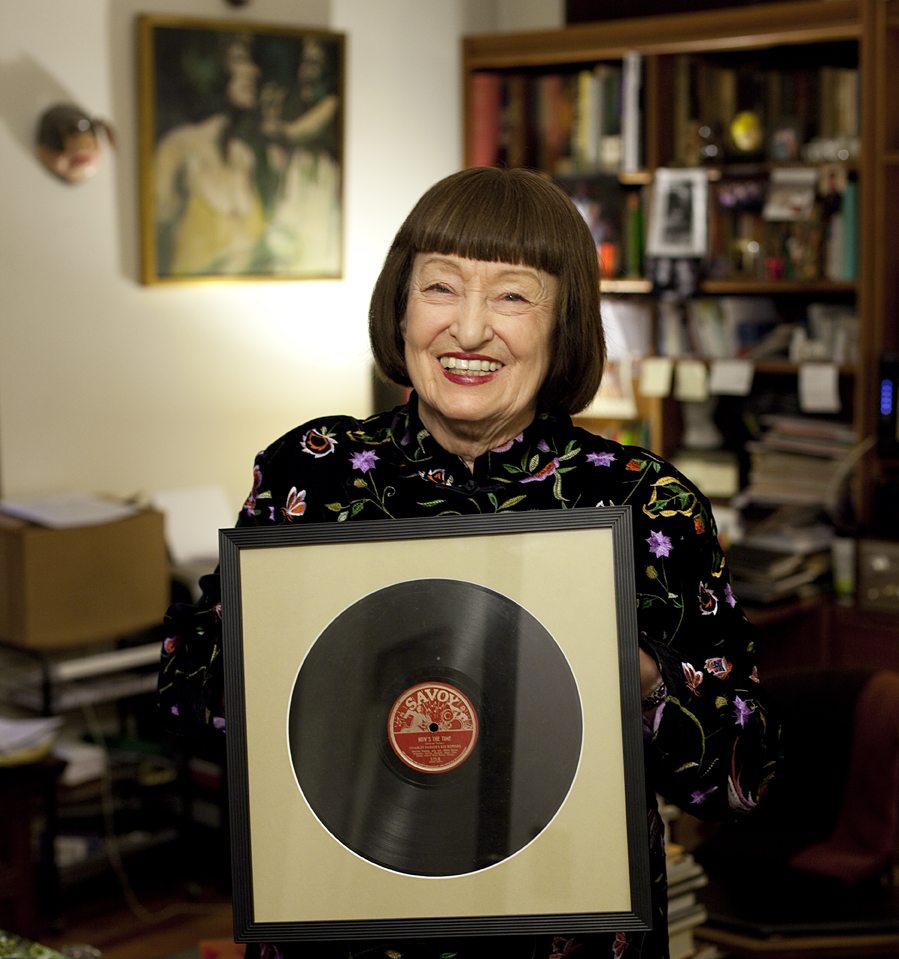 
“This is the first jazz recording I ever heard, it’s not even bebop! It’s a rebopper! ‘Charlie Parker’s Reboppers.'

There’s a whole story behind this record.

Hen Gates that was Dizzy – he couldn’t give his real name – and Max Roach on drums.

So it was Curly (Russell), oh my God – can you believe that?

So on the other side is "Bille’s Bounce", same personnel.

I always sang as a little kid, I never knew what kind of music I wanted to sing and then after I moved back to Detroit to be with my mother and go to high school, there was a jukebox downstairs from my school.

I was always playing music there, you know, putting nickels in.

So I knew most of the artists and their songs that made them famous – not that I was tired of hearing – but I was looking for something else and I saw this. I saw this and I said ‘Oh – Charlie Parker and His ReBoppers, I wonder what that is?’

So I put my nickel in – four or five notes and I thought – and oh my God, this is the music I’ll dedicate my life to.

Whether I sing it, teach it, support it – whatever, it doesn’t matter, I’ll just dedicate my life to that music.

I’d finally found the music that I wanted to do where I felt I could get into and really mean it.

And I’ll tell you, I got goose bumps when I first heard the first four notes, I was like whoa – it was almost like being elevated you know.

And the funny thing about this record that’s so beautifully framed now is I was doing a concert maybe two summers ago and there was a wonderful poet on before us, his name is Billy Collins.

He recited his poetry and afterwards it was going to be me and Cameron Brown the bass player, that’s a duo I have.

I’ve been doing bass and voice since the fifties.

I’m the originator of bass and voice – not to brag – but to say hey to singers and bass players ‘you know can do music this way too. And there are people doing it now – which is great.

This was an outdoor concert and so we were in this big house where we got dressed, got ready and relaxed until we went on.

It was just Billy Collins reciting his poetry and me and Cam.

So my friend, (Peter) - this drummer and a wonderful artist, he knows I’m a Bird freak - and he draws birds – all kinds of birds he’s done - they’re beautiful he sends them to me or gives them to me.

It was Peter, I said ‘Peter it’s good to see you man’

He said ‘ Yeah I have a present for you – I said really?

And so I opened it up – it was this, all framed beautifully.

I got so emotional and I thought oh my God - I don’t think I can go up there and sing right now!

But I waited a few minutes, I hugged him and kissed him and thanked him.

I said ‘Oh my God this is the most wonderful gift I’ve ever been given - except of course the music and my daughter (laughs).

So that’s the story of that record!”