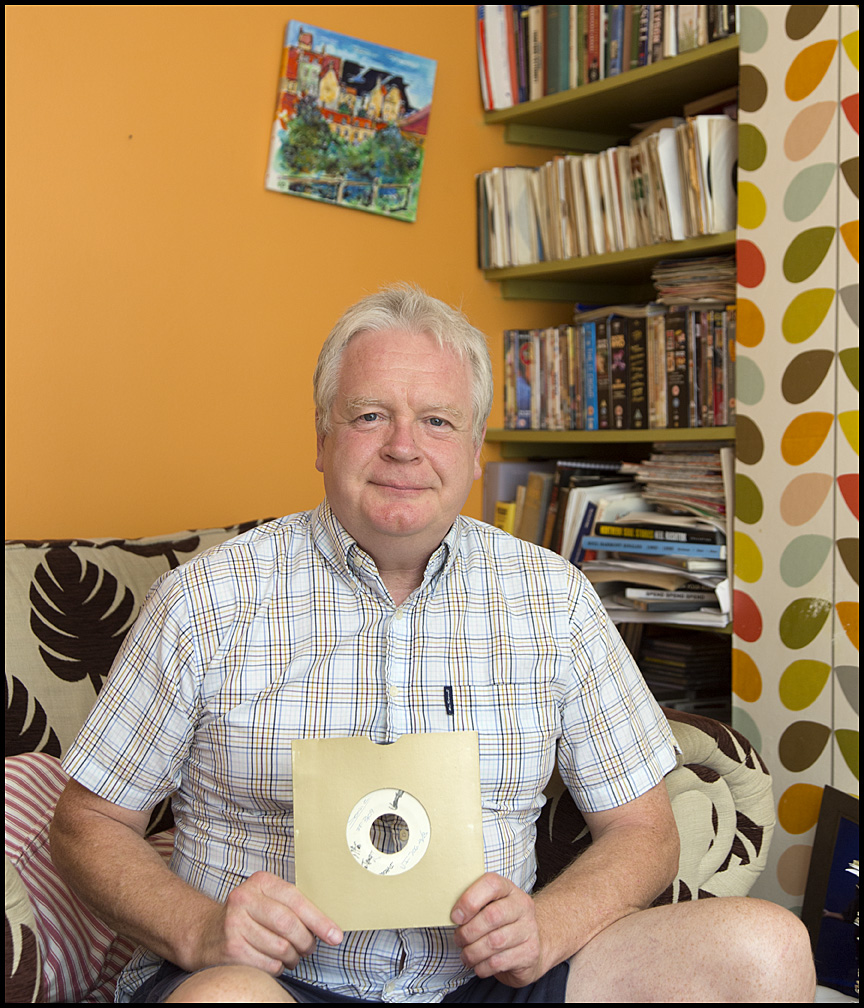 
“Yes it's a recent acquisition, it's by Melvin Hicks and the Versatiles and its called 'The Intruder'.

The reason why this is special to me - A. it's a good story and B. - a great record, and the people involved are quite important. There's a songwriter called Billy Terrell who I've know from his other work with Ray Dahrouge, the two New Jersey guys who used to write a lot of songs in the late 60's/early seventies several of which went on to become Northern Soul hits, Billy wrote ' I want to give you tomorrow' by Benny Troy. Ray and a Billy wrote, 'I can see him' .... No, just Ray wrote ' I can see him making love to you', The Anderson Brothers. And they did a lot of work with GWP Records that I've done CD's of and done a lot of research on, and anyway Billy contacted me and said 'I've got this record you might like to hear, one of my friends was going to throw it out and he said 'That's your old thing - you know - do you want to hear it -do you want it back?'. And he played it and he said ' Oh you know' it had that sort of beat that you like Ade he said 'wondered if you want to hear it?'. And this happens a lot - well not a lot, it happens sometimes and it's hard for an American - even a songwriter / musician to gauge the sort of music that we like. So he sent over an MP3 of it and on first hearing I thought ' Well that seems very good'. And two or three plays I thought that's very very good indeed. So I contacted Billy and said what's the acetate like and he said ' Oh it's just a blank, it's just a blank acetate' I said ' it's a shame, that doesn't matter the music is still very, well, invaluable really but I was going to value it for him so he could make some money from it as well as us license the music , that is Ace records Kent records, so he could put it out eventually but this acetate that he's got is quite an artifact. Then he said ' but it's just a blank there's no label'. And I said ' Oh well that's a shame because if it was with a nice, a proper ..... an acetate by the way is a metal disc.the first way that they cut a record. They either cut it for making the mothers for the plastic to be pressed with or they also make them for promotional purposes and then just to review the record a group will go into a studio and cut an acetate - take it home with them, listen to it a few times and think whether it's worth shopping around. It's like a sort of promo thing but even before promos are made. If it's got a label on it an looks authentic you can tell what era it's from that makes it more valuable.

So I said to Billy ' Well, you know, if ...he ended up selling it me as an artifact and we've licensed the thing and I was going to give him say 'Y' dollars, but I could only give him X dollars because it didn't have a label. Anyway I was still very happy with it just to have this original of a terrific soul song. So when the record turned up it did have a label on it, which was odd, it had the big American centre, not the small English one of course, . It had got a white label both sides and it said 'The Intruders', it had some numbers on and the numbers to me looked like master numbers. I thought well that's a bit odd, I thought, for an acetate. The flip was on as well which is a great ballad. So I took it out and it wasn't an acetate it was vinyl. I don't know how Billy didn't think he had a label, thought it was an acetate see he's a very experienced music business guy, but I suppose it was just plain black vinyl so it didn't look too exciting to him but to a record collector like myself and somebody who knows his discographies the matrix numbers and the ...there was actually a catalogue number on there and it's actually from an established soul music label from the early seventies called Vegor and it it was allocated a number which was never used on anything else. So I actually have a test pressing of a Vegor release from New Jersey, it's a record label, and it's the only one of its kind in the world and it's a terrific record to boot.”

Melvin Hicks and The Versatiles: 'The Intruder'