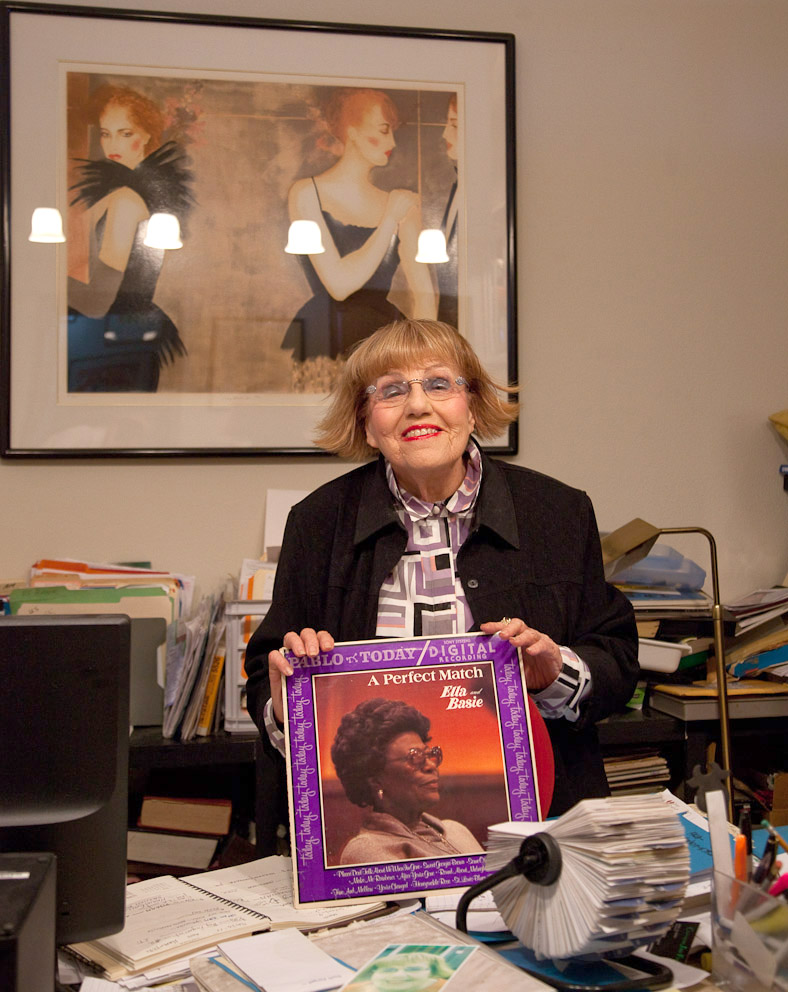 
Audrey Franklyn has a long association with jazz - she worked with Ella Fitzgerald for 37 years, and with many other of the world's great artists.

"It’s called Pablo today; it’s a digital recording. Norman Grantz was the producer, a great man, he owned Pablo Records, which was named after Picasso his best friend. They made the little RCA dog right there and Picasso did that. Norman Grantz told me “ Never tell anyone Audrey” cos I told Time Out magazine; he said, 'Tell them Bernie Schwartz did the artwork or you’re fired'he said. That’s a true story “

So anyway I promoted Pablo records while I was promoting Ella Fitzgerald and Oscar Peterson, probably the greatest pianist since Art Tatum; you can’t get to that level. I was promoting Ella Fitzgerald and also on Pablo records we had Sarah Vaughan. Norman Grantz considered Sarah Vaughan and Ella Fitzgerald the finest singers of the 20th century. Ella was the first lady of song and I had the pleasure of working with her for 37 years, only with Pablo records for a lousy 16 years. The reason I like this album is that when I was a kid I worked with Count Basie at the Pasadena Auditorium plus he used to play the Crescendo. So I kind of have an affinity with him. So this is one of Ella’s 250 albums and she probably did about 80 albums with Pablo. I wanted her to do more because there will never be another singer as great as she. If I have to go into why she’s great that’ll be on my DVD because there are definite reasons that she had such a great voice and the ability to do a rendition of the song in a way nobody else could.

So on the back here we have old Count Basie and he sure loved his scotch and it’s of course called “Pablo Today”. At the back the little RCA Victor logo, that was done by Pablo Picasso, Norman Grantz’s best friend. Now I can say it because Norman died in 2003 - Norman what can you say now Honey! It’s a true story.

But if you listen to the album it’s got on it Paul Smith, who was Ella’s accompanist. He recently died of cancer. He died in his 90’s, thank god still playing the old keyboard. You got Keter Betts on bass. You got Mickey Roker, he’s there. Ray Brown. Produced by Norman Grantz.

Photod by the great Phil Stern who was Norman Grantz’s personal photographer. Now he has a museum Phil does. He’s about 93 years old and still walks around, good for him.

This album was recorded July 12th 1979 in Mountain studios in Montreux Switzerland. That was Norman for you, and his wife now has all Picasso’s in a vault in Geneva, where he has a house, and she lives there. So he really loved the world and he did concerts all over the world. I think he’s lucky to live to 83 because, when you live that kind of life, you know you’re not at the gym every day drinking carrot juice. People give up their lives for their craft; I’m trying not to but it is tempting that’s all I can say.

Now I’m all excited about doing my memoirs and I think I should do them because I’m really one of the last of an era. Not many people have done or seen what I’ve done, especially pop, jazz and rock and roll. So I am going to have a web page that’s why I got the new computer.

I did 500 commercials but always had other people doing them. Now I’m learning the computer and the kids they really make me look like a Nebbish. I come from an era we didn’t have computers but Norman Grantz, back to Norman, he could take sound equipment starting back in the 40’s and make it sound fantastic. He probably was the greatest producer of records that ever lived. And he’s the first person to ever produce albums in concert - artists in concert at amphitheatres.

He did a great job with CD’s but I told him - 'Norman please do more videos; videos are happening.'

He didn’t listen to little Audrey."