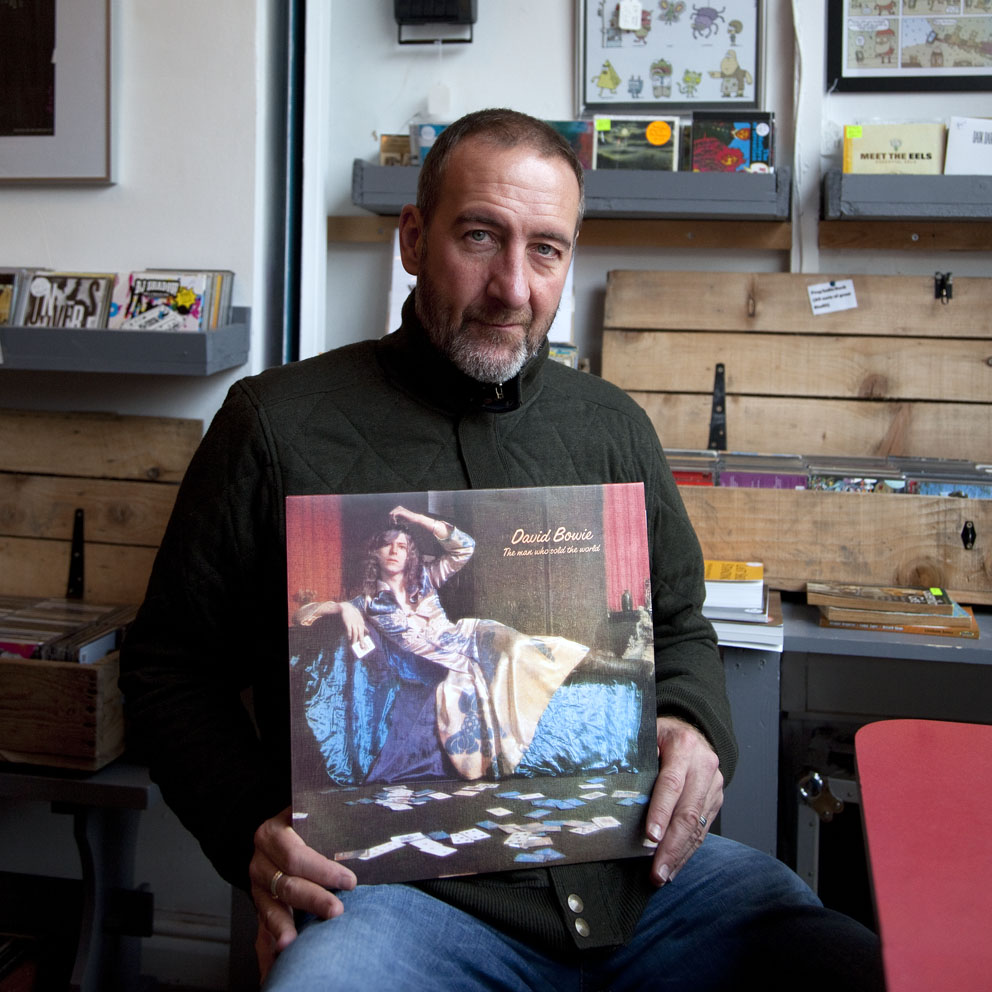 
I first encountered David Bowie on a Granada TV kids programme called Lift Off. Hosted by a woman (Ayshea Brough), a man (Wally Whyton) and an Owl puppet called Ollie Beak. It was 3 weeks later that Bowie would historically appear on Top Of The Pops performing the same song (Starman)…in the same gear…with the same outrageous spiky carrot-top hair-do.

I was 11 years old and my life would never be the same again. I was hardly academic to begin with but once I’d clapped eyes on Bowie all I could think about in and out of school was him, T.Rex and Mott The Hoople.

As my folks didn’t get a record player til early 1973 my only way of hearing Bowie was via Radio 1 or Top Of The Pops. Each week I’d watch it desperate for db to make an appearance. He rarely did.

So…once the record player was in place I had the task in front of me of catching up with the David Bowie back catalogue. And what a confusing place that turned out to be.

Off I trundled to the record shop to negotiate the task ahead of me only to be met by a bewildering array of Bowie albums from an array of different years…all bamboozlingly showing Bowie with the same ‘Ziggy’ hair-style. Even ‘The World Of David Bowie‘ (1966/67) which featured songs I hadn’t heard up to that point (Uncle Arthur, Love You Til Tuesday etc) most of which were influenced not by The Velvet Underground but by Anthony Newley and Lionel Bart!

Space Oddity had the earliest shots of db’s spiny hair style but the photos taken in 1969 upon its release showed him with Dylanesque curly locks. WHAT THE F**K!!??

Perhaps most perplexing of all was the case of his 1970 proto Prog/Metal album ‘The Man Who Sold The World’. The cover I knew (and loved ) was the most identifiable ‘Kicking’ shot. Bowie shot in black and white giving an impressively high kick whilst wearing knee length lace-up leather boots. Iconic. Then I stumbled across a version with a (crappy) cartoon cover…which made no sense at all! THEN I heard about the infamous ‘Dress Sleeve’ or 'Drag Cover’ as it is known. On it we saw Bowie once again with long flowing curly locks,reclining on a Chez Lounge wearing a beret resplendent in a dress!!

I needed to lie down at this point. Talk about ‘pick the bones out of that’!

I was only 12 at the time so forgive my lack of common sense. All of the ‘Ziggy’ covers were of course re-releases snapped up from Bowie previous label (Mercury) by his new label (RCA) and re-packaged to cash in on db’s new found fame through Ziggy Stardust and Aladdin Sane.

My favourite ever album can change from week to week. The only constant is that you can guarantee it will always be a David Bowie album. One week it might be Ziggy, another Young Americans, or Station to Station...more often than not Hunky Dory. This week tho I’m going for the thrilling ‘experiment’ that was The Man Who Sold The World.

Released in 1970 it was his first record with Mick Ronson and was Bowie’s attempt to shrug off his failed ‘one-hit-wonder folkie’ tag (achieved through the albeit limited success of Space Oddity). And by christ did it do the job.

With the benefit of hindsight I can now imagine that David had been listening to a lot of Van Der Graaf Generator. A lot of the material on this doom album sounds like it could have come from the mid of VDG’s Peter Hammill. Gone were the winsome pastoral sometimes orchestral sounds of the Space Oddity album…step in Bowie’s very own Jeff Beck -the Spider with thePlatinum hair Mick ‘Ronno’ Ronson.

The album still sounds amazing today. A tip for youngsters out there about to form a band. Don’t listen to Ziggy for inspiration. Its been done SO many times. No…buy The Man Who Sold The World. Then buy kit as close as you can afford to a Gibson Les Paul and a Marshall Stack…a wah wah pedal… and get to it.

Width Of A Circle is a crazy opener to the album… and to this day is still a breath of fresh air…and the rest of album goes through fabulous peaks and trofts of dynamics and emotions. Tony Viscontis bass playing and production are ace too…but its as much Ronnos album as Bowies in many ways.

Another artist Bowie had probably been listening to was by a guy (like Ronno) from Hull called Michael Chapman. Ronson had recently played on his 'Fully Qualified Survivor' album and indeed rehashed some of the licks he’d used on there. Another great record.

So… if you’ve never heard TMWSTW….give it a go…for me.

David Bowie: The Man Who Sold The World released 1970