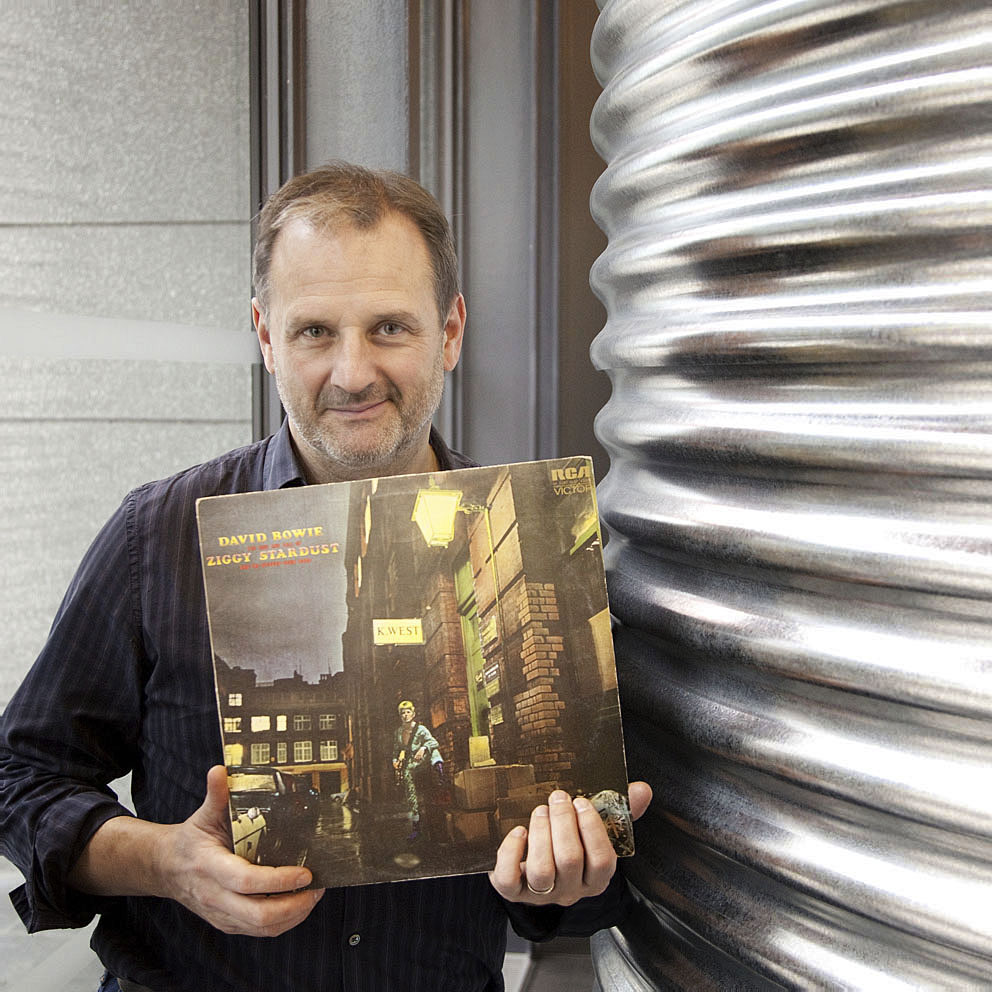 
"Well, this is my original vinyl copy of David Bowie and The Rise and Fall of Ziggy Stardust and the Spiders from Mars from 1972 on the RCA Victor label. And there’s a couple of things that are very special about this for me.

I mean, David Bowie was I think the first artist who really spoke directly to me. The music before that , the big rock bands I grew up on in Bolton, I liked all that but it felt a bit like Bob Dylan did, like older brother’s music or even parents’ music like the Beatles.

When glam rock started and all these guys came on Top of the Pops like Marc Bolan and T.Rex and then Roxy Music and Sparks, and people like Slade who were more fun and rocking but that whole era – because I was 14 then – wow, this is it, ahead of punk rock, this is it!

And David Bowie seemed, out of all of them, to be the most serious and imaginative artist really. All his talk of aliens and Space Oddity and things like that, and he just took me to another place really and it felt like he was talking directly to me.

So this album, which I absolutely adore, I bought in Bolton and one of the things that really I treasure about it is that, as a 14 year old schoolboy I bought this album and then many years later I would meet David Bowie (a few times) and play this same vinyl copy on the national airwaves.

And so I treasure that. I would sit when I was doing my Radio 1 show and we still used to play vinyl records and I would sit looking at that record going round, playing out to the whole nation, to millions of people, and trying to square that with that schoolboy buying it with his pocket money when he was 14. So, it is not just an album that I love in every way, it’s a sort of a marker of the journey of my life in many ways.

Do you know what I mean?

WE: I do. Absolutely.

MR: And so I absolutely treasure this copy. This very copy. It’s a wonderful album; there isn’t a bad song on it. People talk ‘is the album dead?’ and for me the way that the tracks go into each other is perfect. So you know ‘Five Years’ which is one of my favourite songs, which opens the album - such a mysterious, strange, stark song - when it fades out and the other drumbeat comes back in of ‘Soul Love’. If I hear ‘Five Years’ without ‘Soul Love’ it sounds odd to me.

So the sequencing of an album is still a great art form that I cherish really.

And also the cover of it just, I don’t know, in a way it’s not a very good cover – it’s him just in a damp back alley just off Oxford Street with this sign sticking out saying ‘K. West’ and the lantern. But there’s almost something…that lantern illuminated, the light and the tinting on this - and you’d know more about this than me - just gives it a kind of seedy glamour.

Somehow there’s the promise of the night, there’s the promise of illicit pleasures lying just beyond this photo and with this lantern at the front it’s almost like a glam rock Narnia. You know when you go through the back of the wardrobe and you see the lantern and you are in this magical land Narnia and growing up in Bolton as a schoolboy you think gosh, if I could have gone past that lantern I’d be in a magical glam rock London showbiz glamorous world. And it just seems to hold the promise of so many things.

And I still feel that when I look at it. I still feel that, that it’s just, I don’t know, to me it was kind of a cypher for being 14 and it was a rite of passage; this was the world that beckoned beyond being an adolescent in Bolton.

That’s another point worth making that we were just talking about that it is glamorous but there’s rubbish, there’s boxes and rubbish in the foreground.

And I think, like me growing up in Bolton some things that you saw that were glamorous, you knew you were never going to attain.

If you saw something on the Riviera in a Rolls Royce Corniche you thought, well I’m never going to be that guy but this felt like there was rubbish in a back alley.

You think, well it’s only in London and you know it’s a scruffy back alley but what’s going on under these lights and in these windows.

That seemed an attainable kind of glamour. It seemed a promise of what the future might hold that you could reach in a sense.

WE: How kind of maybe he is like an alien in that sort of … That could have been shot a hundred years ago virtually, couldn’t it?

MR: Yes, he just seems to have been plonked there on this damp London street – the man who fell to earth - that was always a good image for him. He seemed to have come from another place and inside you’ve got the guys and they seem to be heavily made-up and looking very mysterious.

The thing that I found out later, which sort of delighted me really, was that all the band, of course, were from Hull.

Here was David Bowie this glamorous London figure and all his band were like these ‘Ey up, lad’ bricky northerners .

What they thought when he made them wear those outfits, you know.

Mick Ronson was from Hull! And he was almost as glamorous as Bowie, wasn’t he? They were like the Jagger and Richards really. And Mick Ronson was some kind of genius and enablerand lieutenant for him, like Little Steven for Bruce Springsteen, your right hand man.

WE: Keeps it all rolling.

MR: But I love the idea when I found out, as a northern lad, that Bowie had chosen to surround himself with these no-nonsense northern types. He outgrew them, I think, and dispensed with them. I think that was not probably dealt with as kindly as it could have been, in retrospect.

MR: But I love it. None of any of that matters if I didn’t love the music but I love every song on this and if anyone ever asks me which is my favourite album I say this without hesitation. Because is there an album that I like better than that? Is there an album, to me, that is more perfect than that? And there isn’t.

There isn’t. I come back to it every time and in fact if I had to do my top 5 I think Hunky Dory would probably be in there as well! Not my top 5 Bowie albums, just my top 5 would be two Bowie albums. If I ever went on Desert Island Discs, which I won’t but if I ever did, it would be unthinkable to do it without one Bowie. Unthinkable, to me. It just meant everything to me."

David Bowie: The Rise and Fall of Ziggy Stardust and the Spiders From Mars released 1972