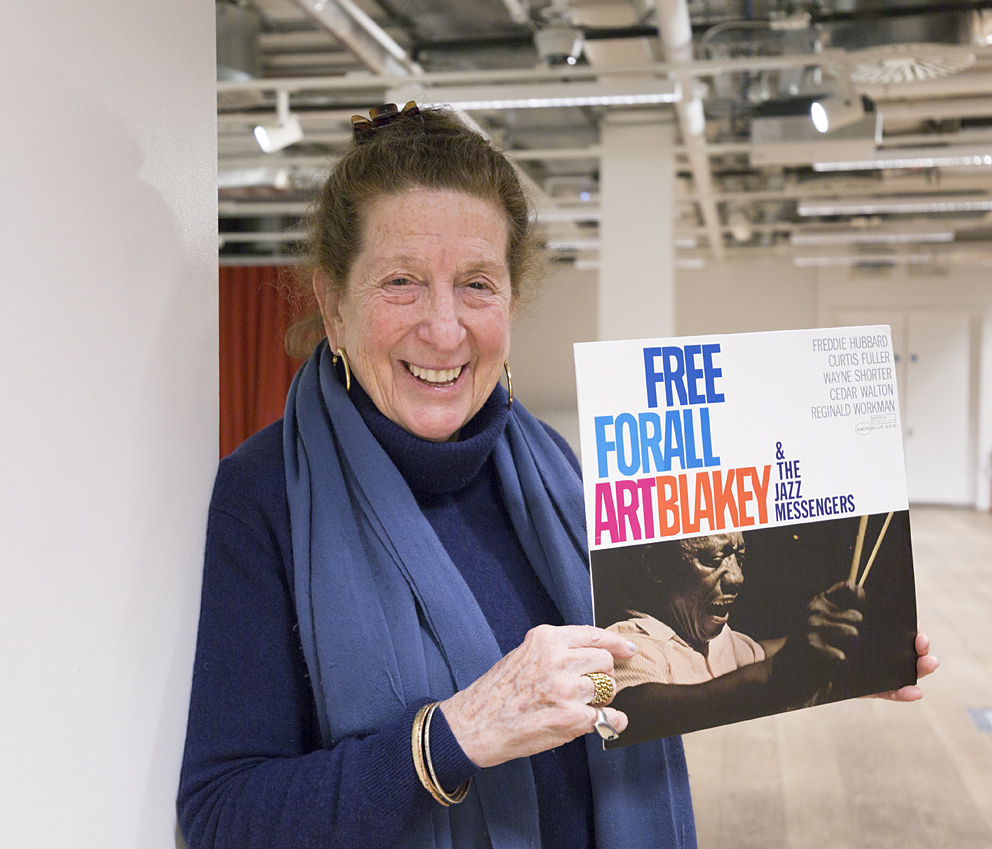 
“When you asked me for my favourite album, it's not that I have one favourite album, but to choose an album by Art Blakey and the Jazz Messengers, especially “Free For All” on Blue Note is very special to me because I entered the jazz life and the world of jazz with Art Blakey. Because when I was a teenager we went to the Village Vanguard and you could sit in the back at a listening section and I heard Art Blakey and he had Lee Morgan, Wayne Shorter, Jymie Merritt, Bobby Timmons.

And when I heard that I was like ok - 'this is what I want to hear the rest of my life '(laughs) and I want to know these people and completely changed everything for me going forward. And then I was fortunate enough to know Art Blakey and he said one time, he said to me 'OK you can be an honorary Jazz Messenger - so I always say 'We are The Jazz Messengers'. And this album has Freddie Hubbard , Curtis Fuller, Wayne Shorter, Cedar Walton, and Reggie Workman ... who are the best best..some of the greatest musicians ever to play this music and personally Cedar Walton was a very good friend of mine and Freddie Hubbard. So it's a very meaningful album to me plus it has all these great tunes right. It has Wayne Shorter “Hammer Head” and Freddie Hubbard tune - which is what Art Blakey did he let everybody be a composer and a band leader. Everybody who went from the Jazz Messengers became a band leader. Art Blakey - what can we say he was just the greatest.

Maxine - “A wonderful person. When you think about Art Blakey and his contribution and think about how he called his band 'The Jazz Messengers’ and what that meant - and he knew what it meant and he was so seriously focused on the music and the people who played with him, and the best, he had the best musicians and they all went on to take that message. That is the message .. the message of jazz and the influence today even is tremendous. When I worked as a road manager I would work with him sometimes or he would call me and he was like 'I have this gig can you come' and I'd say 'Yes' - it's like some dream when we were 15 - right?

So, anyway thank you for asking - this is so great - this is great."

W - “So kind of you, thank you, I really appreciate your involvement (in the project). I've got to ask you - is there a particular album by Dexter that is particularly close to your heart?

Maxine “Well it would be “Dexter Calling” because before I met him I was .... well this makes me look really bad, but before I met Dexter I was very good friends with Elvin Jones and I was over at his apartment.... he lived a block from where I lived on the lower East Side and John Coltrane came over and he had “Dexter Calling” - he had the LP, with him and they were going to listen to it. And I was like 'Wow who's that ... wow he's really good looking', and they looked at me like you know 'Why is she here.. why ..'and they were like - 'It's Dexter Gordon!’ and I'm like 'Oh I thought he was older' because he was gone .. he was in Europe already and somehow I had this idea of him as being of the older generation. So when I met Dexter, which was in 1975 I told him ' You know, ‘Trane had your album when he came over to the house.'

new album and they all sat there, and there was a lot of people there like there used to be in the old days. Dexter loved that story. He was like 'You think they liked it?' and I was like 'Yeah they seemed to like it’. But you know I was ... and then I remembered - you know that photo of him in the phone booth so then of course I met him and you know ...it's a great album, that “Dexter Calling.”

But his favourite album was “Go” - out of the Blue Note albums with Billy Higgins, Sonny Clarke.

W “Goodness so many stories.”

We spoke a while longer about Dexter's influence in shaping jazz - what you are about to read may be a revelation to you.

W ..Maxine you mentioned a story about Jimmy Heath.

Maxine "Jimmy Heath for my book on Dexter, the biography of Dexter, I went to his home and spent all day there with he and his wife and he played music and talked to me about Dexter and then he told me that he and John Coltrane had the Dial recordings and they listened ... and they were 78’s. And they played them over and over and they'd wear out .. they'd have to get a new one.

And he told me that he and ‘Trane switched from alto to tenor because of Dexter - and I have never heard that. If you think about it you know ‘Trane's influence and I mean they're influenced by Dexter but beyond that - to me it changes what we know of jazz history when we think what might have been if John Coltrane and Jimmy Heath stayed on alto. Because they wanted to be Charlie Parker and then after that they wanted to be Lester Young and then when they heard Dexter they were like opened up .... he said that that opened up so many new ideas to them.

Maxine “It's very good .. yeah that book is good.”

Art Blakey and the Jazz Messengers: “Free For All” released 1965

I Walked with Giants: The Autobiography of Jimmy Heath