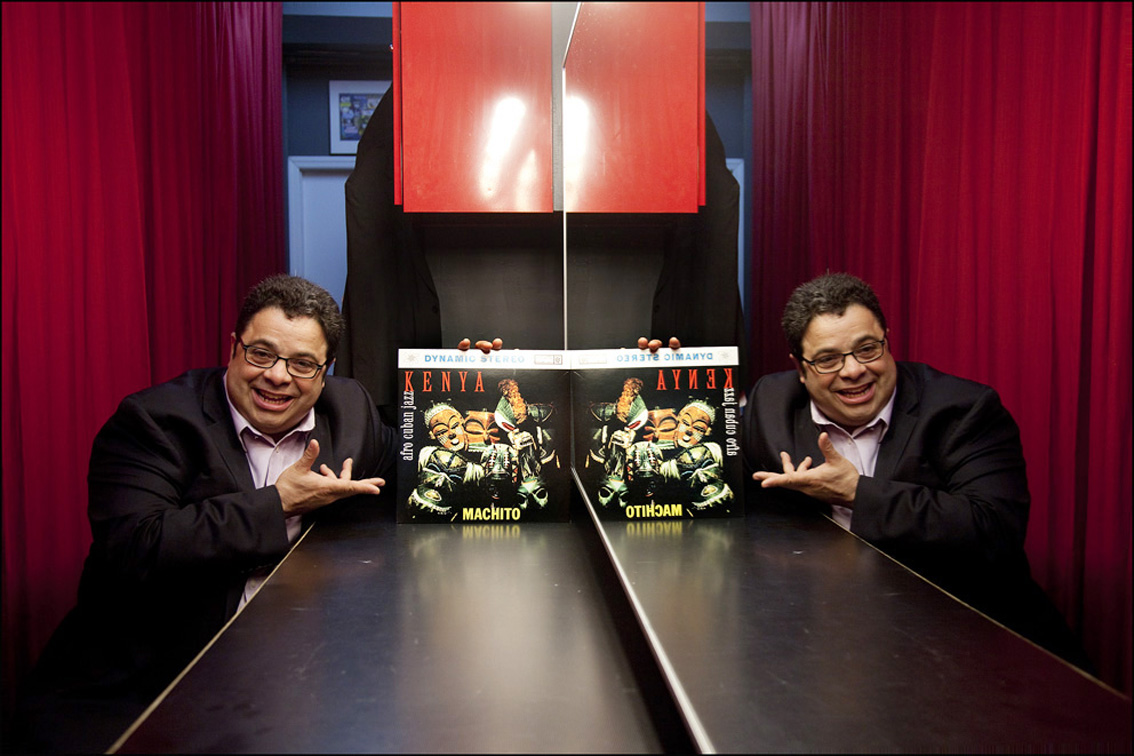 
"We have this beautiful thing we do called The Fat Afro-Latin Jazz Cats which is our pre-professional program big band and one of the parents of one of the kids – and they’re from middle school and high school heard me say at a show that I’d worn out four or five copies of this record so he bought me one, so it’s a brand new vinyl pressing of Kenya.

I wore out four or five copies so I listened to it! - we actually play some of the music - Wild Jungle, Conga Mulence, Kenya, Tin Tin Deo, we play Holiday Mambo.

It’s considered the first Afro-Cuban big band Jazz big band record and I think the reason for this is that it has no purpose in terms of being commercial, sell records or just be a dance record – it’s really about the music.

Machito was really quite the gentleman and really cared about having this emphasis on his big band and it was about jazz – these guys loved jazz, you know.

They were Latin bandleaders who had profound respect for jazz."

WE – Cool - this is lovely setting for the picture.

AO – I think so too, with the mirror and the red curtains.

WE – There’s going to be two of you Arturo!

Of course I don’t agree – there’s not enough of me – God knows my time is squeezed like crazy.

We’ve been doing great work with The Afro Latin Jazz Orchestra; this is in my opinion the best Afro-Cuban, Afro-Latin big bands in existence.

We started this orchestra as part of Jazz at Lincoln Centre, we were there for five years and ventured out to create our own organisation and we’ve done incredibly well since then.

We’ve created our own non-profit work, our education work, we’ve toured, won Grammys, been nominated for for Grammys.

We’ve actually superseded anything we would have been allowed to execute under Wynton’s aegis.

So it’s been amazing, we’ve just recorded out fourth CD which is called ‘The Offence of the Drum’ and it’s all about how the drum is the tool – like the internet - that both oppresses us and enslaves us and sets us free and liberates us – to be redundant!

It’s literally about how the drum is an incredibly powerful tool and how it has shaped all of our lives in incredible ways.

Tonight we’ll be playing a piece of mine called ‘Malecón and Bourbon’ which is an imaginary intersection, The Malecón is of course the famous street in Cuba - the intersection of Bourbon Street in New Orleans and The Malecón and it’s a place where we really discover the roots of jazz and the roots of latin are the same and not one is hierarchically above the other – they’re part and parcel of the same reality.

Somehow we got those two artificially separated.

At the end of the piece we play a kind of ragtime piece and start deconstructing it – it’s a jazz history lesson backwards.

From Cecil Taylor working our way back to Scott Joplin. We end up with Scott Joplin, but the thing about Scott Joplin is that it’s quite right (in the context) and so we just try to get the right edge to it and all of a sudden that is wildly latin – it’s a really cool piece.

Though my kids like my music so it’s not all bad!"