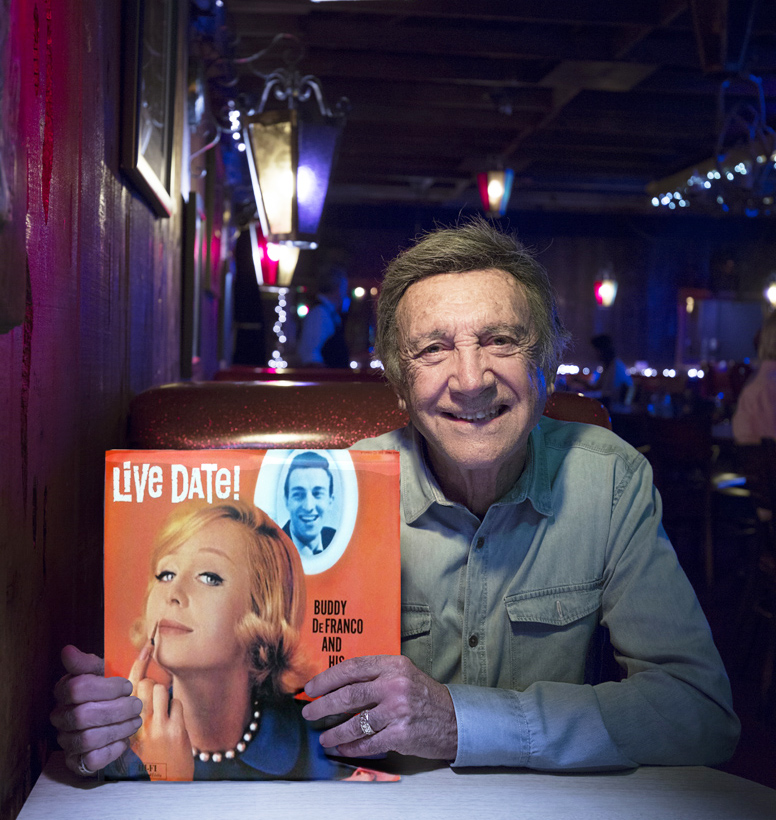 
"Okay, sure, thank you. Well, we can start with with my probably very favourite jazz album. I've been fortunate, I've done a lot of recording over the years. But when I was about, on my early 20s, I was working with Buddy DeFranco, the great clarinette player. And actually I started started working with him when he I think, when he left when he left Tommy Dorsey. And and started - I was with one of his first small groups. And that was, gosh, that was in the late 40s in New York City. And trying to think of that the other fellows in the group, well, Teddy, Teddy Charles, vibe player, and great bass player. And and who worked subsequently worked with, with with Bird - Charlie Parker, Teddy Kotich - he was in the band, Harvey Leonard was the piano player and I'm going, goingway, way back. Anyway, throughout the years I would do things with Buddy. Buddy came to California and was out I was out here for quite a while and I did various recordings with him and a lot of gigs around mostly with small groups, which was a lot of fun. And, and we did some, oh, one album, which, which I think is really good. A big order orchestra. It's called "Broadway Showcase" And I think Russ Garcia was the was the arranger and Broadway, Broadway songs, you know, great, great tunes. Oh, my gosh, "We're Having a Heatwave". And "Who Cares" and great, great, great arrangements of those things. And we did various albums through the years, but one one of my favourites - it was called "Live Date!” -“Live Date!”. And there's a picture, a picture of a lovely young lady on the cover. And I'll give you the personnel. I'm racking my brains now- it's a long time ago. But these fellas - you can't forget them. Okay, it was Buddy DeFranco's All Star Group. And, course, Buddy on clarinette, Victor Feldman - your countrymen on vibes, Pete Jolly playing piano, and Barney Kessel on guitar. And the young - at that time, young brilliant bass player Scotty LaFaro, Scotty Lafaro.

Now, is that everybody? I hope I'm not leaving anybody out. Well, I think Herbie Manne was on that too. Yeah. So and, and the record company. I don't remember. I remember doing stuffwith Buddy in New York with a big band for MGM Records. Now that goes way back MGM. This was all this label. I don't know. But, but if you can get your hands on this, this album that that would of course, indicate the the record company and so forth. But that's that's one of my favourites.I like, I like the way it was recorded. And the tunes we did, and playing with, you know, my buddies that I work with for many years and and and we we got along so well, musically andotherwise. And Barney Kessel - greats. Brilliant player and great sense of humour. And, and and we had a ball doing that and, and of course, Scotty LaFaro. Are you familiar with Scotty? Yeah, yeah,he he got killed. Not too long after that. Yeah. I think it was a car accident, if I'm not mistaken.And then through the years I spent two years on the road with a Terry Gibbs Quartet with the great Terry Pollard on piano. And we had let's see, 1953 and 1954. The Quartet was Terry, myself, Terry Pollard, and different bass players. Bill Crow was one and a fella from Detroit, good bass player, Ernie Farrow And then I don't remember the last one. 1954 and 55 - we worked - there was so many jazz clubs back then some right all across the country. It was great. Oh, yeah. And and we worked like I said, we worked 50 weeks, 50 weeks a year. We could afford 52 weeks - all these clubs, and we worked a lot at Birdland. We're almost a house band. Whenever we were back east we were at Birdland because they love Terry, and in our group we work opposite Charlie Parker and Dizzy and Duke, Basie's band. All of the all of the great all of the great stars of that era George Shearing's group and, and are so many - Slim Gaillard were sometimes there be three three different attractions, and that there was wonderful Earl Bostic. And I got to during during that period, I got to know some great drummers of that era, Art Blakey, and Roy Haynes - Roy and I were were good good friends."