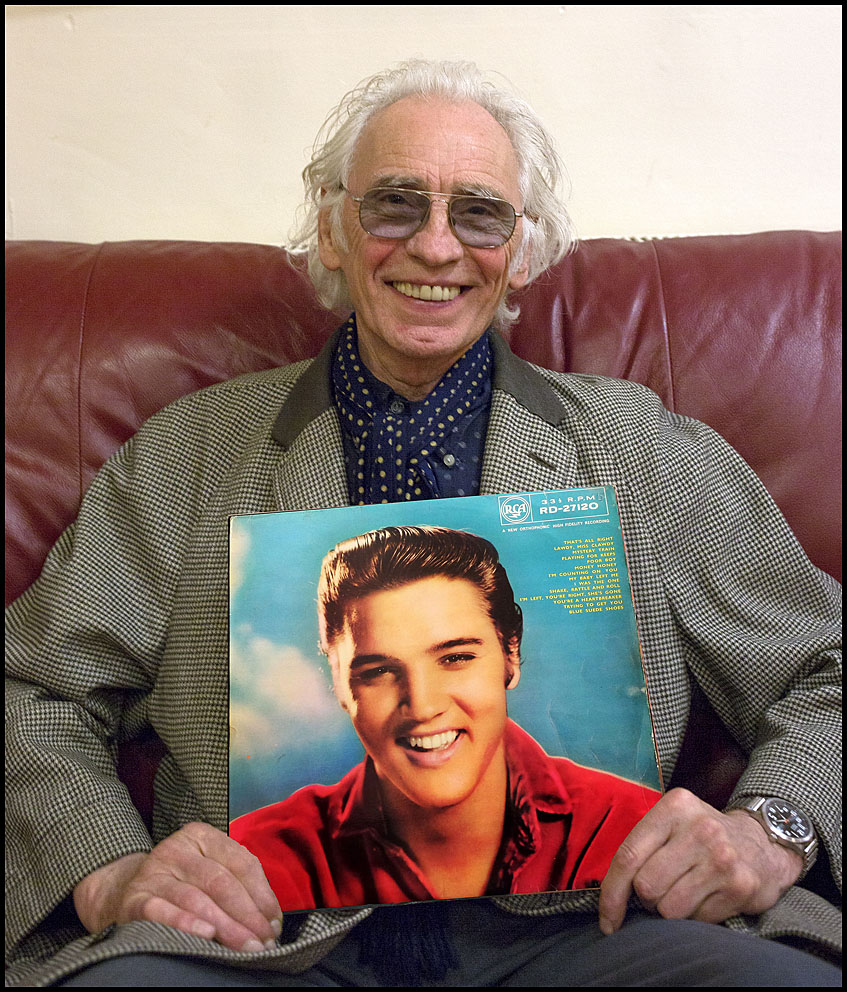 Then immediately he was in RCA studios in New York. I think most of that album was recorded in the RCA studios - but it's got all the classic ones on there - the one .that really lifted him into another sphere I guess. He was a massive influence on me.

Before Elvis my other major influence in contemporary .. though it was far from contemporary - was Lonnie Donegan because it was so different then to me as a kid.  When I was 14 or 15 and heard Rock Island Line I just thought it was unbelievable.

And it was only years later when I realised that it was an old Leadbelly number but makes no difference - what Donegan did with it was great.

I guess that was my first musical influence but the one that really hit me hardest and stayed with me that was Elvis.

And as I say the album was called simply Elvis and a pink headshot of him on the front.  But he's still got Bill Black and Scotty Moore and his drummer - his name escapes me (D.J.Fontana) - they were the nucleus of the band then.

He did things like Lawdy Miss Clawdy, which is an old Lloyd Price maybe - or someone like that.

So he did plenty of covers - probably all covers - but wonderful album - just the recording the wonderful chemistry of the recording which happens from time to time - and it frequently happened with The Beatles of course in those early days.

Well That's all right Mama - I never get tired of listening to that. All that early Sun stuff - Sam Philips- incredible."

WE.  Would you say it was to do with age at that time... did I it strike you as just a key moment in your musical development?

"Oh definitely cause I've got two older brothers, one of them is quite musical... played piano pretty good but he was into, was of, the Frankie Laine /Johnny Ray era, but I was a bit young for that. I still enjoyed it, I really liked Johnny Ray and Franke Laine.

A lot of those - you really can't call them crooners, they were just after people like Frank Sinatra stuff like that, but that was pre rock and roll - I always enjoyed it.

Mainly through my brother because he would - soon as Saturday came, he would go down to the music shop and buy the sheet music bring it back and play on the piano at home.  So that stuff rubbed off on me in a big way.  But the other major influence musically for me was - ‘cos we didn't have a record player or a radiogram then, all my influences from the radio initially.

So family favourites was the big one, which was the forces radio request program and that was two hours on a Sunday afternoon about 12 till two.

And that's where I picked up so many wonderful influences like Billie Holiday and Ella Fitzgerald and all the great singers you know.

The beauty of that kind of a program that you had all kinds of requests... Stanley Holloway and there was bizarre stuff - George Formby.

I mean so rich in choice musically speaking.

I know that Lennon is famous for saying that before Elvis there was nothing  - I mean he was just being a bit - but obviously there was a hell of a lot before Elvis.

In fact I don't think Elvis was the first rock and roll record but he was the first one to take it way up.  I mean there's been several recordings.   I mean Fats Domino recorded a great New Orleans - well you could hardly really call it rock and roll - R&B maybe - but that was The Fat Man which I've heard many years later and that - recorded in 1948 you know.  There's a guy.... I've got a good friend - he's really into rockabilly which is still a thriving subculture in this country and across Scandanavia it's massive - but rockabilly around that time that Elvis went into Sun studios there were dozens of rockabilly outfits doing the rounds without recognition but now a lot of that stuff has been re released and, you know, it's been hunted down by various labels and they're putting out all of this amazing rockabilly which has not been heard since the very early 50's.  So although I agree that Elvis was the main one that kicked rock and roll off in a big way it had been going on before.  It's just the terminology I suppose, it was obviously a black thing.”