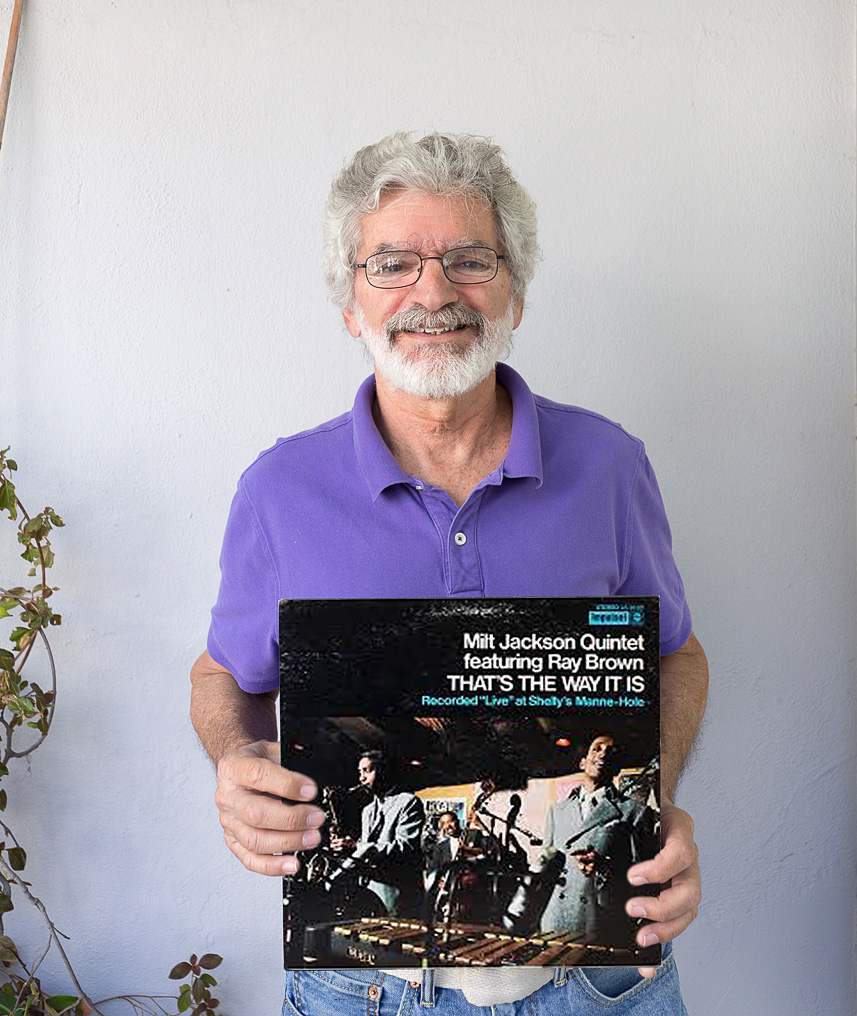 
"Your’s was not a trick question but I have a kind of trick answer, it's a double LP because it was recorded at a live performance. The first disc is called 'That's the way it is' and the companion disc is called 'The Way it has to Be”.The club was Shelley's Manne-Hole, which was the site of a lot of incredible music in its day. This as a group led by Milt Jackson

at least in its title but the true driving force was Ray Brown, my guru. And the sidemen on this were Teddy Edwards on Tenor sax, Monty Alexander on piano and Dick Burke on drums. This to me was the apotheosise, sounds like a disease, the quintessential jazz recording. For one thing it was live, for another it had Ray Brown on it, for another Teddy

Edwards ... With whom I worked and recorded down the road ... Not at this period. It had a drummer that didn't think much of my playing at the time but eventually I think either he

came around or became senile and accepted me. And Monty to me represented the swinginist piano player, and one with just an incredible sense of humour, endless creativity.

Brown took not one but two unaccompanied solos. And on both of these pieces, they were both standards, one was 'The very thought of you' and the other was 'Tenderly'. And the musicianship is impeccable, the intonation was flawless and his arrangements were ingenious. Now I have long been a student of the Ray Brown Bass method, a book that

I've had for decades.. the covers were tattered ..the pages were marked up. And, If I'm not mistaken some of the magestic soloing that Ray did on the recording incorporated some of the etudes and excersises in the method book. I mean, to me, this was the most creative way to incorporate ones practice regiment into a live performance and both tunes start with just Ray and then they bring in the band. Then they end with Ray. I was so struck by all the talent and the inventiveness and execution that I wore out the album. I borrowed a copy and made a cassette copy and I took it with me everywhere. So, fast forward a few years and I introduced myself to John Clayton, one of the great bassist in the world and a protege of Ray Brown. And I was so intimidated at the lesson I could barely play. So John graciously left, he said can I get you a juice I said 'Yes anything'. And while he was away for a few minutes I warmed up, I shook my body into a frenzy and then I took a few deep breaths and started to play. So by the time he came back he said 'You can play'. And so he had me play a little with the bow and a little pizzicato he took some notes and towards the end of the time he said 'What really knocks you out, what do you like to hear?'.

So I preached the gospel of that recording and as he opened the door for me to leave he said 'why don't you learn those pieces'. So at once I was struck with the absurdity of that suggestion and also kind of glad that he thought I was capable of getting somewhere close to that material. So the album had again been worn out and recorded on cassette and the cassette version is all I had to go by. But I decided to take up Mr Clayton's challenge and worked on the pieces and got them both to within a reasonable degree of facility an I'm proud to say I've been able to play them both on different occasions. Once on a cruise, a jazz cruise, and another time at a jazz festival. So they represented a little bit of everything.

Ray Brown - the very reason I decided to walk away from a job as an English teacher, I like to tell people I'm a recovering English teacher. So, being able to take on something of that degree of mastery as rendered by my ultimate hero Ray Brown and one of his acolytes Mr Clayton gave me a sense that maybe I belonged somewhere in the fraternity, maybe some distance from those folks, but at least it gave me the sense that I could walk alongside the Giants...some distance behind them. And again having Dick Burke as a side man at some point and Teddy Edwards I've felt somewhat vindicated and again I never tire of listening to what Ray Brown shared with the world."