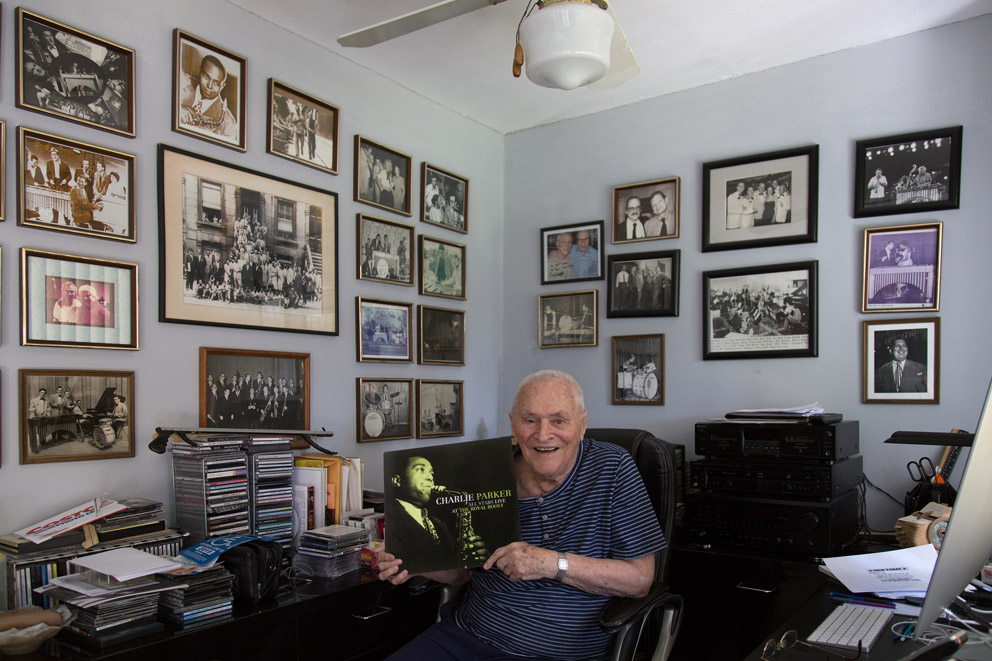 "Where in England are you from Bill?"

"I believe in fact that that (area) may be one of the first trips I've made to Europe. I've been to Sweden when I was younger then later on in life that's how Buddy DeFranco (and I) got together at Ronnie Scott's club. We became partners after he played he played the single half hour and I played a half hour and then Ronnie asked us - because people like what he did they liked the clarinette with vibes because of Benny (Goodman) and Lionel (Hampton) - that sound.

You take the Glen Miller Band - you take a big band and put a clarinette lead on top of the Glenn Miller Band - Benny and Lionel made that famous. Now he (Ronnie Scott) asked Buddy and I to play a tune together and we tore up the place we don't you know we play. And then he said - 'can you play two?' Then it became three, Buddy and I started playing together - and for next twenty years!!

So Bill, let me once again, I mentioned - I can take that picture off (the wall) of Charlie Parker and hold it because I can't give you a favourite album because there's nothing that he has done that I don't like. Because to me, as I wrote in my book. He's the only person - musician I think is a genius, because that's a very loosely used word. And the reason - I'll tell you what I said in my book, if I can say that, again - I can't say it the same way I can. You will see what I wrote my book. Every day. I'm sitting with a guy where you're sitting who's a jazz historian who knew more about me - taking everything. I learned every word in that book, and I edited it myself. And when he saw me, I kept changing it (the text) - by playing jazz - you don't play the song the same way.

If I told you some story right now and 10 minutes later, he told me the same story.

But this morning, I kept changing the wording but i'll tell you why I tell you - you asked about Charlie Parker. Everything he played to me was perfect. I can't find the 'maybe' (he's a genius) Now Dizzy Gillespie who I learned more from than anybody because it was very hard when I first heard bebop when I came on the army in 1944 there was no record with a record band. So what I heard it came back on furlough. It was most foreign thing I ever heard my life but when I was looking for! I had all this technique is a vibe player. But I gave up playing vibes because I love Roy Eldridge and Lester Young. But it was kind of beautiful playing it but I couldn't find what I could do - and i play drums, I play drums in a big band. play drums in thr army - I was a very good drummer. But getting getting back to the thing. I love Dizzy Gillespie but the couldn't say maybe said (his) sound wasn't (as) good as Clifford Brown, or Freddie Hubbard. You could maybe say that sound and our Tatum probably was way so way ahead of everybody in the 30s harmonically and technically, all he was all over the place with changing chord changes that maybe couldn't say because he did all that, that he could have been a little cold. Maybe - that's a 'maybe' (genius) With Charlie Parker I found no 'maybes'. So the word genius can only be considered to be maybe connected to somebody to what they do. Maybe Buddy Rich could have been a genius, because I haven't heard a drummer since then I can play that way. I played drums. I like other drummers to play with, by me. But as far as playing the drums every time I will I will Buddy. I played with Buddy as a kid. Our audience was the symphonic musicians the whole percussion section would be there. And none of the drummers believe what he could do. But getting back to Charlie Parker, I can't give you a favorite album or favorite song. "Just Friends". These things are very famous. You know one of my favorite things he did what was with walking on Neil Hefti record date when he played that song. I can't remember the name of the song. Yeah, the Bird came in on one of those records with that very famous thing "Repetition". And so that chorus he played on it. Once again, Eddie

Corps, he played on anything to me. Was that good?

He was like, you know, really to I haven't heard a musician, really before him and since him, that's I can put in that class. The only one I can put in that class is George Gershwin. Those were my two because he was George Gershwin was so melodic And if you take everything Charlie Parker played, even when he played double time or triple time that if you slow it down, you can put a lyric to it. It was that (melodic) to me anyhow."