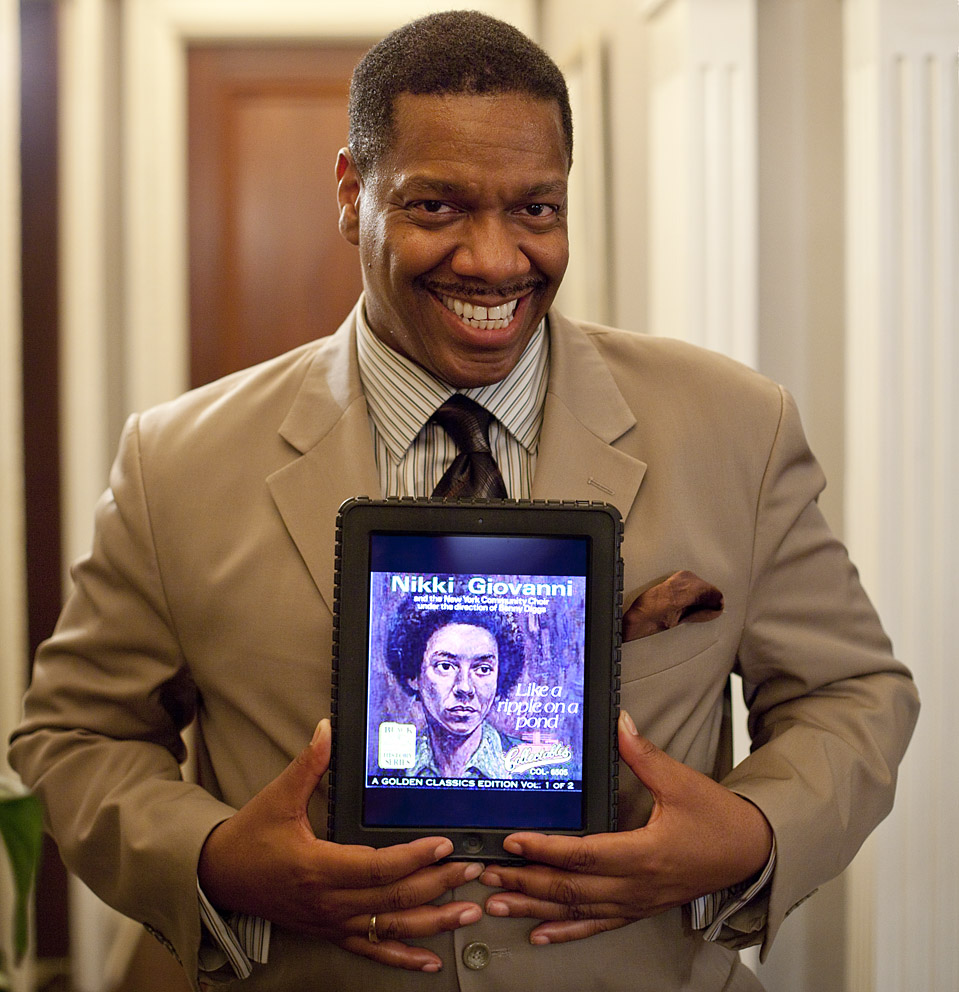 Walt Whitman: Choral Director, Nikki Giovanni: Like a ripple on a pond

Nikki Giovanni and the New York Community Choir under the direction of Benny Diggs.

"There is one project, one particular CD, that sticks out in my mind, that I know I was very inspired by, and that was a project from… it was actually from the New York Community Choir and they did a collaboration with a poet called Nikki Giovanni. And so they would collaborate poetry and music together and it was just a sound, what she was saying, the choir sound, the organ sound and I used to love to listen to that sound. It was something about just the sound of it. They sang older songs – hymns – but that was one of the recordings that I used to like to listen to.

Then I think there was an old James Cleveland recording - who was considered the King of Gospel - I used to listen to and so those when you talk about inspiration, going back, that would probably be it.

The New York Community Choir and that Nikki Giovanni piece was a very… because it was so different… it was like they weren’t doing… It was like word and song and the choir’s way of doing that in those days, I mean, it wasn’t the norm. So it was more like a poet, you know.

But that’s what it was for that and Nikki Giovanni - she’s a very famous black poet.

I think she’s still alive. She’s almost like a Maya Angelou but just a little bit more radical. She’s just been more radical, or she was radical then.

. It was like the whole Martin Luther King stuff. There was a lot of civil unrest kind of stuff. You know, riots and stuff like that going on. Black Power. Everybody was Black Power. Afros. Dashikis. I think that’s when Amazing Grace came out with Aretha Franklin and she was wearing a dashiki on the Amazing Grace album. It was all during that period of time.

Different movements are going on and so we had a lot of different choirs coming up and New York Community Choir, I guess, was like the choir that was kind of paving the way for a lot of the stuff.

They were just stirring up stuff. A guy named Benny Diggs – actually he’s still in New York – and he works in fact for the Three Mo’ Tenors - do you know the Three Mo’ Tenors? – he has a collaboration with the guy that was playing the music, Joseph Joubert who is a classical pianist so that’s how I met him. Actually, I met him with New Kids on the Block. That’s how I met Benny.

He used to manage New Kids – he was the voice trainer for New Kids on the Block. The whole…is that Josh? What’s the boy? What’s the name of the real famous…?

Oh you don’t know. I guess that’s on the pop side. They’re pop!"

Nikki Giovanni: Like a ripple on a pond released 1973